Changed Button Presses So They Don't Interfere With Typing

I set the "M" key press to only work when the game is paused.  This prevents "M" from pausing the music when typing a todo.  I had to entirely disable the "P" key press for pausing the game, because there was no elegant way to change it using the current code. There's probably some way to do it involving the AddTodo field focus, but it's relatively minor and I'm just going to leave it out for now.


Modified The Way Player is Paused During Level Loading

I was disabling the Player object during board setup, and then reenabling when board setup was finished. I have suspected that having the player game object disabled may interfere somewhat with the movement of the enemies.  It gives me no errors, but just to be sure, I decided to disable just the sprite and then set the Player script to paused.  I wasn't able to access the Player.player.paused(player is a reference to the instance) variable from BoardManager, even though I can access it fine from other scripts.  I get a "null reference error" - this gave me a lot of grief in the past.  I suspect it has something to do with the BoardManager being instantiated, whereas the other scripts that are accessing Player.player.paused are not being instantiated.  They just exist within the scene.

So, instead, I used:


It's less elegant than "Player.player.paused = true;", but it works.  I'm not sure if it makes any difference.  The enemies do seem a little more responsive in their attacks, but it's hard to tell. They still seem to move in roughly the same pattern.

I tweaked a lot of the different UI elements - adding padding and slightly modifying shape.  I changed the font on many UI elements to PressStart2P-Regular, that came with the Unity Rogue 2d Tutorial.  I chose to continue using Arial on the Todos, because Arial looks better at a smaller font size, and I didn't want to make the fonts big enough to look good use the PressStart font.  I made the text darker on the todos and the other UI elements with grey backgrounds

I fixed the Inputfield from (seemingly randomly) being selected while you're moving the character.  It turns out is wasn't random at all, it was the UI navigating between UI elements until it hit the input field.  I turned the input field navigation to off, which should solve that.

I added a speed modal.  It sets each todo to complete 1, 2, 3, or 4 tiles when they are checked.  I would go into more detail about how I did this, but the actual creation of the modal was a bit complex.  It's not really a modal as much as a configuration window that pops up on the right panel.  In order to activate and deactivate the  modal, I had to create a separate script that mostly just keeps track of the "speed" variable, that is never deactivated. 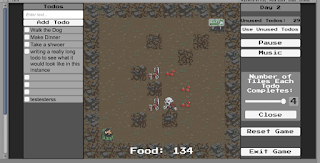 I also added an image and text that says "Build Mode" instead of "Paused" when the level is building. 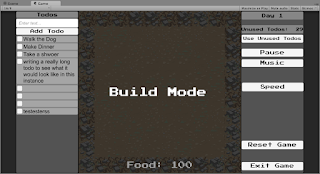 I think I'm going to add some kind of instructions.  I'm debating whether or not I want to implement any kind of deleting or editing of todos before release.